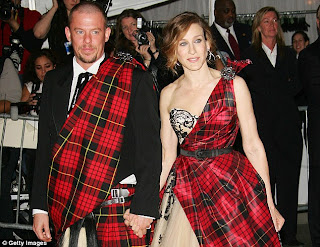 'Rise like lions after slumber in invanquisable number-shake your chains to earth like dew which in sleep had fallen on you. Ye are many, they are few' - Percy Bysshe Shelley; the last verse of the Mask of Anarchy. 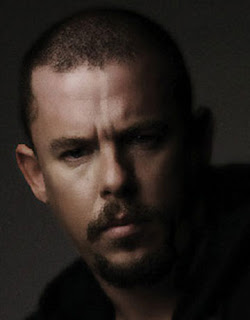 "Twenty years ago, as an apprentice in the Savile Row workshop of Gieves & Hawkes, Alexander McQueen, bored one afternoon, wrote "I am a cunt" (sorry I detest this word) in the lining of a jacket destined for the Prince of Wales. Many years passed and the Prince's stepson, Tom Parker Bowles, married Sara Buys in the society wedding of the season; it was McQueen who designed the bride's dress. It was the final proof, if anyone still needed it, that fashion's ultimate enfant terrible has grown up", wrote Jess McCartner-Morley for the UK Guardian in 2005.

Lee Alexander McQueen - (he dropped his first name) was the youngest of six. Born on March 16 1969 to a social studies teacher and a London cab driver. 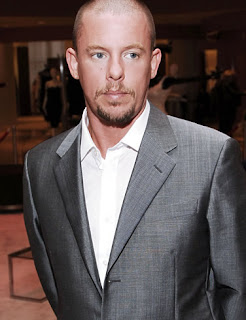 McQueen knew at a young age that he wanted to be a designer. He would fashion frocks for his three older sisters he he along with his Aunt was very close to.

He has described himself as the "pink sheep" of his family - a misfit, but not rejected. He told his family he was gay when he was 18, although he had known for at least 10 years. 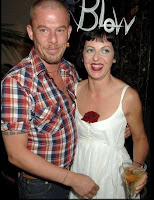 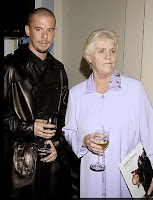 McQueen with Isabella Blow & with his mum Joyce
McQueen received a bachelor of arts degree while taking the MA design course at Central Saint Martins college in London. In 1992 he sold his entire graduate collection to influential stylist/ fashion editor Isabella Blow. She is credited with discovering not only McQueen, but also models Stella Tennant and Sophie Dahl. She became patron, unofficial public relations agent, and muse for McQueen. 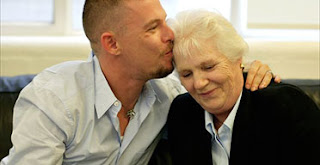 Alexander with his mum
In May 2007 he lost his close friend and mentor Blow when she committed suicide-after being diagnosed with ovarian cancer. Then last year his Aunt Dolly - his mother's sister and a great supporter - passed away.

But it was the loss of his adored mother Joyce on February 2 that is thought to have left him suicidal.

An excerpt from the British Council Design Museum states that from the start of McQueen's career he had both shocked and delighted his audience with raw presentations often depicting bleak history and anarchic politics. These shock tactics began in dimly-lit warehouses away from the staid environment of the London Fashion Week tents. His autumn/winter 1995 catwalk show in particular captured the headlines. Entitled Highland Rape, the collection featured disheveled and battered-looking models in torn clothing. It was McQueen’s comment on the rape of the Highlands at the hands of the British; interpreted by others as a perverse and misogynistic celebration of the sexual violation of women.

At the time, McQueen said that he had been misunderstood; he was trying, he said, to make a point about how 18th century Scotland has been romanticized, and it wasn't all about "beautiful women drifting across the moors in unmanageable chiffon".

October 2003 show, a dance piece choreographed by Michael Clarke and based on Sydney Pollack's film They Shoot Horses, Don't They?, the impermeable Anna Wintour sprang to her feet, applauding wildly.

A fantastically influential figure at Vogue, it was Blow who persuaded McQueen to change his name to Alexander and propelled him into the spotlight.

McQueen has always been more about psychology than clothes. He is not particularly interested in pretty faces or pretty clothes simply on a superficial level. "David Beckham is vainer than the veins on my dick," he once said, with consummate delicacy.

While he said he didn't care what people thought or whether they liked him, insiders claim it was quite the opposite - he cared very much.

As a man who rarely missed an opportunity to stick two fingers up at the Establishment McQueen was completely bowled over by the Queen when he collected his CBE in 2003.

'I looked into her eyes, it was like when you see someone across the room on a dance floor and you think, "Whoa!",' he gushed.

With his beer gut, shaven head, bad teeth and thick glottal cockney accent, he was never going to blend in with the luvvies of the fashion world - he was fidgety, bolshy and lewd, and loved to shock.

Alexander McQueen once said his life philosophy was to: 'Live slow, die old.' In the end, he managed neither, but he certainly crammed an awful lot into his 40 years.

In brief I am shocked that anyone would describe McQueen as being misogynistic (hatred of women). While pouring through one collection after another of his today, it is as obvious as the nose on one's face that he understood women, he appreciated women, he adored women. As a male you don't have to sleep with them to love them. I suspect that he was incredibly sensitive and deeply moved and effected by everything he touched and all that surrounded him. Emotions like the hairs on your arm that stand up when you feel an abrupt chill.

The tailoring, the fit, his creative genius made him a tour de force in the fashion world. Rebel yes, exciting yes, will be greatly, undeniably missed, most definitely. 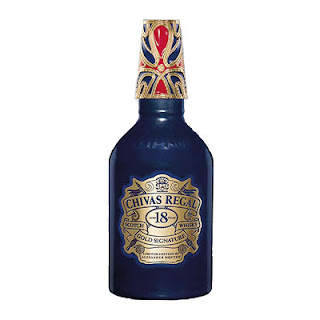 Cheers and Peace be with you Lee

{go forth & live responsibly}
genius comes in many forms

I don't really follow fashion, and I have to admit that I hadn't heard of Alexander McQueen until earlier today when I read about him dying. So sad that he felt that suicide was the only answer to deal with the pain of losing the people he loved.

He obviously made a big impact on the fashion world in the time that he had.

sometimes we lose some of the most talented people due to their sadness... it is so tragic ... such a beautiful post deb....i wish you a magical weekend... xx pam

very very sad to see such talent die young. Even at my darkest times I want to be here and make a difference!
Karena

Tragic death at such a young age and with so much to look forward to. May he rest in peace.

Thank you for posting this, he will be missed.

I have to say yours is the best blog post I've seen yet. He really was a great talent and I wish someone would have gotten him some help to deal with the grief he was obviously going through.

Such sad news... have a great weekend!

He was so talented. I dont see how a person who dressed women so beautifully could not love them. I loved the collection he once did where everyone was made to look like royalty. It was my favorite. It was so magical.
*kisses* HH

What an amazing homage you have created here. A tragic loss to the Fashion World...
Nathalie

Darling, Wishing you a lovely weekend and a loved filled Valentine’s Day.

You really know how to do your research and write a most moving tribute!
~xo always

Beautiful post for such a tragic story. Fortunately his creations will live forever.

A lovely tribute to McQueen, Deborah. My duaghter and I adored his clothes. We will never know the desperation he must have felt...especially after the loss of his best friend, his mother.
He will be greatly missed by the fashion world, his friends and his followers.

Awesome tribute! I just finished my post - I've put it in the drafts section to reread and post tomorrow, it was really hard to write. You did an outstanding job! He was one of my all time favorites and I'm so sad. What an artist.

Dear Deb,
So sorry that I'm late commenting on this post. I have put my blogs I follow in order of latest posts and it is hopeless !! I'm going to change it back.
What a terrible loss to British fashion... and what a terrible place he must have been in. He was genius and I loved his work. It just shows us too that fame and money means nothing. Great post Deb. XXXX

this was such a fantastic highlight-filled post on mcqueen's life, loves and achievements! he will be so incredibly missed on the runway for his visionary approach to fashion and the female form.

I really enjoyed reading your tribute to the very talented but sadly pained Alexander McQueen. Thanks for sharing.

This is sad. I feel for him as I always remember him as one of the few London success stories that did not pretend to be something else or lose his accent.

A sad truth is that the "success" people praise him for was not what he needed to be happy. If only he had friends around him to guide him.

I'm not the slightest into fashion (i closely resemble Worzel Gummidge (Do you know him!) but your piece on Alexander McQueen was great. Lively blog, keep it up.

Fashion being my first love and career, i have followed the path of Alexander MC Queen. I have so much respect for artist who do not compromise and try to cater to the taste of the day, Alexander McQueen was one. It is so sad to see some one so filled with genious(and fame ) be so lonely and desperate. I have a very difficult time understanding and accepting suicide, is it courage or such intense despair that no fear of death and pain can prevent.
Thank you for such a beautiful Ode to a sad brilliant man
Francine

lovely tribute.
it's not an easy life for the creative.

Deb, it sounds very much like YOU understood HIM too! An incredible, much-deserved tribute! oxox AJ

What a well written and researched post. I admit, I knew nothing about him before reading this - I'd heard his name on Project Runway, but that's about it. Your blog is always a pleasure to read, even when the subject matter is so sad. Hopefully he's reunited with his beloved mother in heaven. Hope you're doing well Deb!!!

The world is a sadder place without his wonderful talent - beautiful post. Leigh

As odd as this may seen, I dreamed about a month ago that he would be found in his home, just as he was. Since then I had been taking mental notes, filing away images of images of his work, as if I need to do a thorough inventory for when his is really off to the next plain.

We just cannot keep people from diving down the rabbit hole, if that is their direct intent.

Bless him, art and his genius heart.

A beautiful tribute to a lovely designer. What a tragedy!

Aloha, just thinking of you and hoping you have found peace with a decision that will be best for you. I want you to know that in my move to Hawaii we lost both of my husbands parents within 3 months of each other . Nothing is ever truly perfect in this crazy thing we call life, but I do believe the love we share with the people we most care about is perfect. I hope you find strength in your dreams and really live to make them come true...I believe in you :)
all my Aloha
Brandi

Lovely tribute.
I loved this man's clothes.
A visionary who will be missed.
Very sad.

That was a lovely tribute.