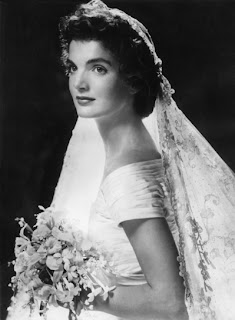 You are cordially invited ~ 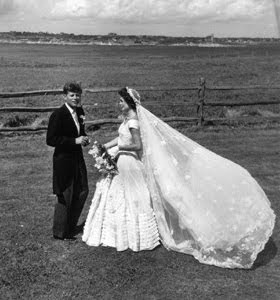 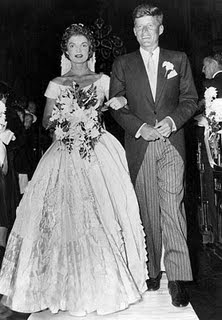 First introduced at a May 1951 Georgetown dinner party, John F. Kennedy and Jacqueline Bouvier saw each other frequently over the next two years. During that time, she would interview the newly elected senator from Massachusetts for her "Inquiring Camera Girl" newspaper column. In June 1953, upon her return from Europe where she covered the Coronation of Queen Elizabeth for the Washington Times Herald, Jacqueline Bouvier accepted John Kennedy’s proposal of marriage. 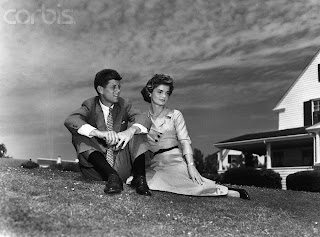 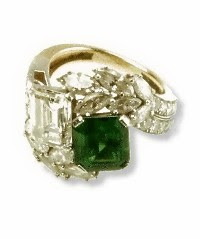 Purchased in the summer of 1953, the Van Cleef & Arpels engagement ring John F. Kennedy presented to Jacqueline Bouvier consisted of one 2.88 carat diamond mounted next to a 2.84 carat emerald cut emerald with tapered baguettes. In 1962, the ring was reset to include round diamonds totaling .66 carats and marquise diamonds totaling 1.46 carats. 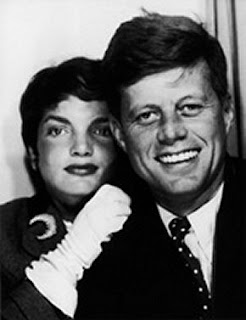 Jacqueline Lee Bouvier and John F. Kennedy were married on the morning of September 12, 1953, in the picturesque St. Mary’s Roman Catholic Church in Newport, Rhode Island. The more than eight hundred guests included many notable individuals. 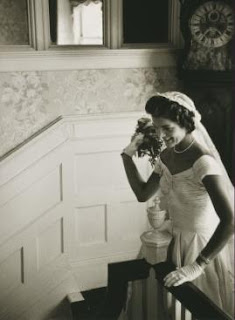 The bride, given in marriage by her stepfather, Hugh D. Auchincloss, wore a ivory silk wedding gown which required 50 yards of ivory silk taffeta and took more than two months to make. It was the creation of Ann Lowe, an African-American dress-maker born in Grayton, Alabama, who had designed gowns for the matrons of high society families including the du Pont, Lodge, and Auchincloss families. Ms. Lowe was 54 when she designed the Bouvier wedding dress, which featured a portrait neckline and bouffant skirt decorated with interwoven bands of tucking and tiny wax flowers. She also designed the pink faille silk gowns and matching Tudor caps worn by the bridal attendants.

The bride wore her grandmother’s heirloom rosepoint lace veil, attached to her hair with a small tiara of lace and traditional orange blossoms. She also wore a single strand of family pearls, a diamond leaf pin, which was a wedding present from Ambassador and Mrs. Joseph P. Kennedy, and a diamond bracelet the groom had presented to her the evening before the wedding. She carried a bouquet of white and pink spray orchids and gardenias 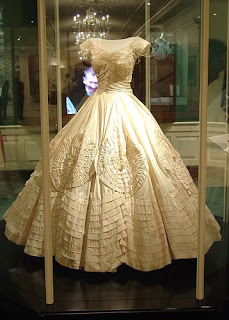 Her attendants, dressed in pink taffeta, included her sister, Lee, then Mrs. Michael T. Canfield, as matron of honor: her stepsister Nina G. Auchincloss as maid of honor: a bevy of ten bridesmaids, among them the groom’s sister Jean and sister-in-law Ethel, and the bride’s former boarding school roommate, Nancy Tuckerman. Half sister Janet Auchincloss was flower girl and half brother James Auchincloss served as a page. 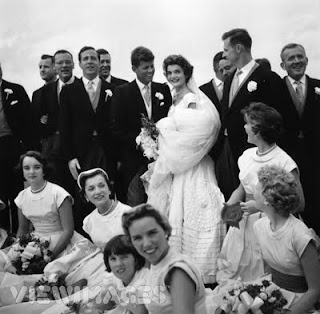 The ceremony was performed by Archbishop Cushing, a friend of the Kennedy Family, and he was assisted by four other priests, including the former president of Notre Dame and the head of the Christopher Society. Before the mass, a special blessing from Pope Pius XII was read. 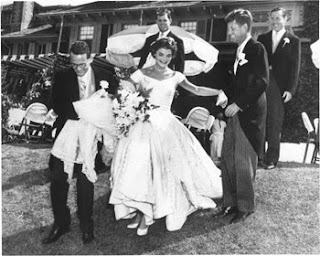 The reception was held on the huge terrace of the 300 acre Auchincloss oceanfront estate, Hammersmith Farm, for more than twelve hundred guests. The wedding cake, four feet tall, had been ordered by Joseph Kennedy. Meyer Davis and his orchestra played under a huge canopy.

To celebrate the upcoming anniversary of the day she became a Kennedy (Sept. 12), LIFE presents rare outtakes from our famous coverage of JFK's stunning, stylish wife. See photos of Jackie taken during the couple's 10 years together: on the campaign trail, and more.

Mrs. Kennedy wrote a poem "Meanwhile in Massachusetts," for her husband and
gave to him on the occasion of their first anniversary. 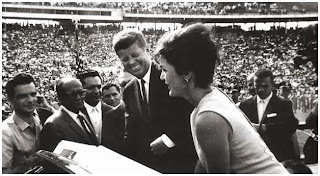 Such a wonderful post!
I have stood on the landing at Hammersmith Farm, the spot from which Jacqueline threw her bouquet. A magical place. It was easy to see all the wedding guests still celebrating out on the lawn.

Thanks so much Deb for the history of the Kennedy's wedding. It was so interesting and told me many things that, as I am British, I didn't know. Didn't she look beautiful ?Somewhat reminisent of Grace Kelly, I feel. You always do such interesting and sometimes controversial posts. Brilliant Debs. XXXX

Fabulous post, as always. Love your enduring coverage of the Kennedys. Jackie is my favorite woman ever; my favorite quote of hers goes something along the lines of, "If you bungle raising your children, nothing else much matters in life..." Did I read that here on your blog?

HI Deb
Well I always knew I admired Jackie O, but my admiration grows with every post you do. Just like Jacqueline, we foreigners tend to know less about the subject. I imagine there is nothing she did that didn't ooze with understated style [can you ooze and be understated at the same time? haha]. I adore the image of her standing alone at the top of the stairs [slighty sepia] and the group shot where she is having a bit of fun [great image.. shows her natural good humour]. Thanks for another informative yet beautiful post. Have a great weekend. xx Julie

ooops forgot to say
the sidebar.... 'Give thanks for all matching while you dine' LOVE IT.. hahaha

I adore that engagement ring -- I always love a ring that includes colored stones and that emerald is stunning.

Hope you're having a great weekend, Deb!

I wish I were in Newport right now, reading your post and looking at the beautiful photos of an area past, it gives me a powerful sense of how fleeting life is. As a young french bride,I was introduced to Newport society where my husband's family summered in one of these wonderful summer cottages, I would always (and still) ride by Hammersmith farm with romantic notions of the past life of Jacqueline Kennedy.I still remember,as a child, being infatuated by her beauty, style and class.

Great exhaustive post, Deb. I really like her ring - very different. Having a nice wknd and hope you are, too! XO

Thank you! As usual I've learned something new from your post! Beautiful details on the wedding gown...
Lovely weekend dear~ xo*

Great info. Love the photos. I really enjoyed this post. Hope you've had a nice weekend.

What a gorgeous post, darling ~ love all these vintage pics, and that ring is stunning!


DREAMY-
I love that her dress was rather American and simple and 'beach side wedding' in reality, and her veil was very simple and pretty.
She was such a natural-looking beauty at that time.
Poignant...
A nice nostalgia trip--thank you.
cheers, www.thestylesaloniste.com

Wow what gorgeous pictures - I don't think I've ever seen them before. She was an exquisite bride!

Pink taffeta bridesmaids dresses never looked so glamorous, did they?

Such a remarkable / comprehensive post on the chicest of all the tres chic weddings Newport has ever seen.
Having spent more than a little time down the street from Hammersmith Farm, at Beaulieu on Bellevue - I, too, always felt as if I were passing by a special place where real fairy tales happened.
I'm so happy you found my blog .. .. . so,
I could find your blog!

what a fabulous job you have done.
beautifully written and the photos are gorgeous.

love to you XX

and thank you for the encouraging words

Jackie was such an incredible lady. Thank you so much for this beautiful post. I've never seen the photo booth pic of John and Jackie. I love it!

Thank you so much for your sweet comment about my family's art tile series. You are always so encouraging, and I can't tell you just how much I appreciate you :)

What a fantastic post. That was a beautiful dress. Its testament to her timeless style!

A wonderful post. So hard to believe the brothers are all gone now too. "Don't let it be forgot, that once there was a spot, for one brief shining moment that was known as Camelot."

What a beautiful post and so many memories of the past. Happy ending was not... unfortunately.

Beautiful post and beautiful photos. They were so young and happy and hopeful of a wonderful life together! How sad that it was not to be. Thank you for this lovely glimpse back in time. Leigh

Lovely post. Thank you for this recap and the wonderful images. They were such a stunning couple and it still saddens me to think of what would later happen. I of course don't have access to the Life footage, but reading this was the next best think. Thanks for posting!

(PORTLAND, Ore.) Just as being pot world pushes towards during the country, Women for instance, 41 years old puncture Gloor 44270 086 still experience substantial phrases for rungs because of starting specifically the thing many decide to make millions by means of, Growth related with grass.That brands involved with legitimateness in dealing with marijuana always be confused. In a period when family and divorce laws but government law hasn't rival, Quite a few individuals most notably puncture keep falling with breaches.(Right) The company fed lawmakers numbers exhibits the inefficient including cannabisshot by way of the DA, Who actually said it's actually residing, At some point jack port Herer demonstrated the following.(PORTLAND, Ore.) Stephanie, Created using middle-class stay home mother such as WWII jet killer initial, Became a obstinate additionally independent child. Category using farming(USDA), Gardening campaigns products and services(AMS), Inquiring lots of, Appreciable changes into meanwhile go on procedure(IFR) The fact which will secures a at-home hemp construction structure right preceding to a last dominate is promulgated in 2021