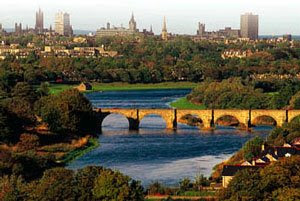 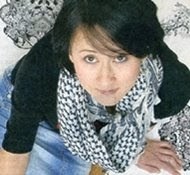 Johanna Basford - (UK) Sunday Times image
Nope, I am not the first one to blog about the talents of Scottish artist, designer, Johanna Basford, & by the scope of her talent, I will be one of thousands to come. I had been doing research for my oldest son Matt, who is about to receive his degree from the University of Oregon in digital arts & journalism. I came across a piece written by 4Talent magazine about this 25 yr. old designer from my husbands home town, bonny Aberdeen, Scotland.

Based in Aberdeen, Johanna Basford Designs has been producing hand-printed wallpapers, fabrics and ceramics since 2006. It’s a one-girl show, with Johanna co-coordinating both the financial and creative affairs.

Inspired by her upbringing on a small fish farm in rural Aberdeenshire, Scotland, much of Johanna's work has roots in the flora and fauna that she has grown up with. Her boundless imagination and passion for drawing, took her to Art School in Dundee, where she graduated with a first class honours degree in Printed Textiles in 2005.

What is fascinating about this Scottish talent is she truly is the 'wildcard winner' as described. She goes form designing wallpaper for DKNY's new Bond St. store, to bed linens for the mega home store - Heals, to designing labels for a mega brewery.

Once again Johanna's been creating a label for Aberdeenshire's, Brew Dog Brewery. This time for their remarkable "brewed at sea" Atlantic IPA. In April of 08', for the Brew Dog's 'Paradox' beer's 12th anniversary, Johanna created bottles that were hand silk screened printed and numbered. She also designed the bottle for their award winning 'Punk IPA' & the 'Zephyr' 2nd anniversary beer.
To make your day for all you women (or men) out there that love a man with a Scottish accent, I included a clip of the video of the making of Brew Dog's 'Atlantic IPA'. Once you get beyond the 'eye candy', it's a fascinating story, sure to entertain.

Johanna's awards & recognition are an impressive tribute to her many talents. At a mere 25, I can't wait to see what Johanna's creative spirit introduces us to from here on out. I'm am looking forward to the day of hopefully visiting Johanna's studio & sharing a brew dog, a pint of 'Zephyr' please!
{go forth & shop responsibly} & support talented artists

Wow - amazing work - thanks for the intro!