Us gals dream of 'shiny things'; that's a given. However, I am a bit strange when that 'shiny thing' was a Dualit toaster. For so long I have coveted this capacious, somewhat repugnant of a toaster. It's like a car accident; you know you shouldn't look, but you can't take your eyes off of it. Like a mother, no matter what others thought, it was love at first sight.

Last month I realized my dream. For once I went with my gut feeling to bid (& win) a Dualit on ebay. This one trick pony of a toaster was listed as "not working", but my husband can typically fix about anything. I did my research to determine if extra parts were easily available & made the leap to bid. Mr. Fix-it quickly diagnosed a broken switch & I ordered the part lickity split (again from ebay). The cost of the toaster, along with the replacement switch, along with the Scottish style breakfast I had to cook for my repairman as payment, came to a total of $46.45. The stainless four slot toaster retails for $340. My fix it husband said it was an easy repair.

I know I am not the first blogger on the block to write about Dualit, but I wanted those to know who also worship this timeless household appliance & don't want to pay the retail price; there is hope.
To get started on searching for an ebay buy, either used or new, click here. Don't trust ebay? I suggest buy.com & nextag.com to search for the best deals out there. For reviews on Dualit toasters I trust Williams - Sonoma. For replacement parts through ebay click here.

So now I too can be admired for my bling. I can't wear Chanel, but I have my Dualit toaster. 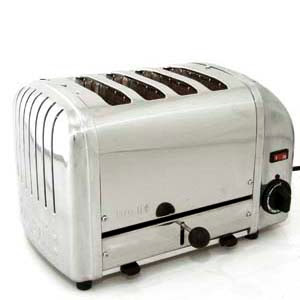 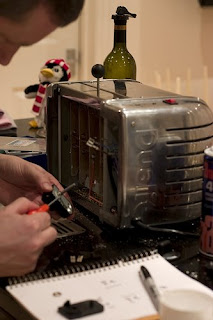 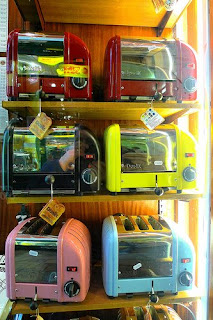 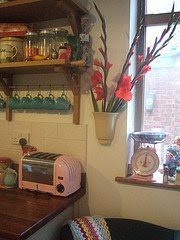 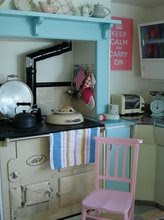 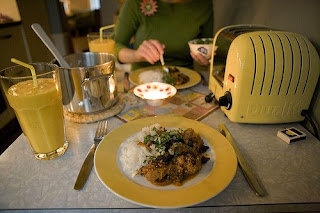 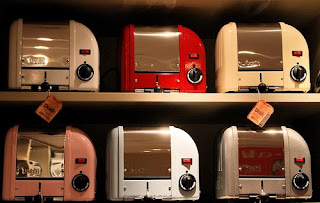 dualit by dbepete on Polyvore.com
www.dualit.com
Posted by Dumbwit Tellher

I'll take a blue AND a green one! I need a matching teapot too.

I think I have toaster envy now -- does that make me weird?! :-D I'd love to get my hands on one of those cobalt blue babies!!

Hey, would your Mr. Fix It know why my toaster only toasts one side of the bread?! In both slots, no less.