In a Norwegian Mood 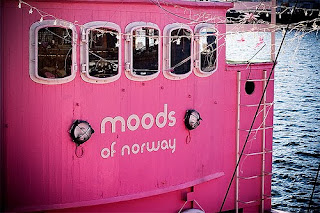 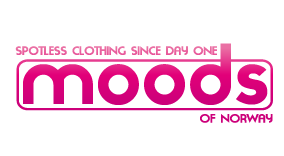 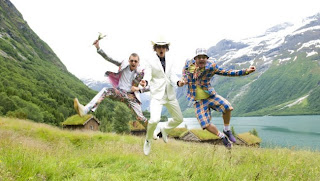 Here's a story not about a lovely lady, but a three-some of lively Norwegians who were minus just enough sense.

Just enough to not be crippled by fear in what would seem to most like an concept created during an alcoholic haze. 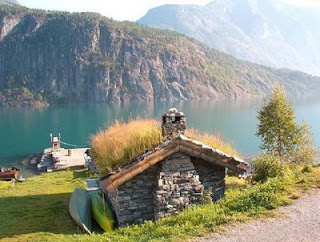 That idea started in the town of Stryn, Norway (pop. 6750) by two local designers, Simen Staalnacke and Peder Børresen, upon homecoming after years of global travel, nights of sizzling cocktails and international studies; gave birth to a concept to be known, worn and adored, as the Moods of Norway. Soon the duo meet up with their third musketeer, Stefan Dahlkvisit and drew their upcoming lines.

The brand still has its headquarters and showroom in Stryn, a magical place known for glaciers, salmon fishing and one newly opened escalator. 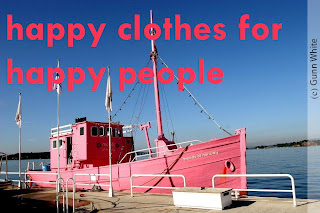 Moods of Norway has been doing what they themselves proclaim as the 'hibeddy-dibbedy' on the international dance floor for 6 years. The brands philosophy is the same as when first formed even though the Norwegian oil price is a flexible as an Bulgarian gymnast after 14 tequila shots (their words not mine).

This unorthodox team of designers self-professed goal in life besides, "making our grandma's happy, is to create happy clothes for happy people around the world". 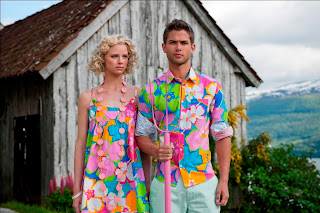 “There were two things we wanted to do. One was to tell Norwegian stories, and the other was to make clothes. If you look at the details on Norway’s different traditional costumes, they each have their own history. One of the symbols we use on our clothes is the aerosol can – to show that this is a Norwegian invention,” says Simen Staalnacke. 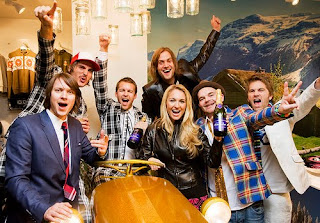 If you ask me, they are marketing geniuses. Yes of course they create lively, out-spoken, if not preposterous clothing and accessories. But as most of us savvy consumers know, the large slice of 'success pie' is drawing us in through our desire to have 'that kind of life'.

It's marketing a lifestyle; whether your selling a home behind those guarded-gates or selling a BMW 650i; even a polyester, screaming plaid blazer that looks much like what your father wore in 1977; his disco days.

And baby these 'Scandahoovians' know how to market the fun. One look at this foursome between the cotton-candy pink silk sheets and my dear grandmother Inga would of let out a a rather boisterous , "Uff da" 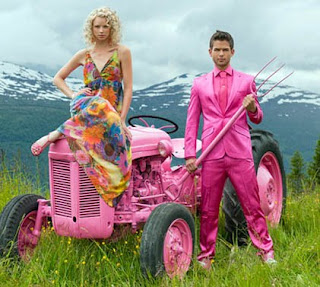 Revenue in 2007 peaked at 23 million Krone;
I'm not intelligent enough to figure out the exchange rate
in dollars. I need an app for that. 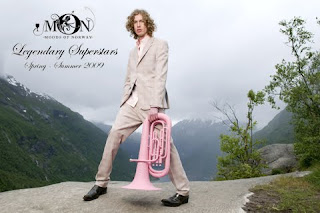 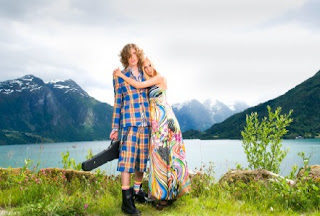 “We want to show that Norway is a good place to live and we see that people in other countries find these Norwegian roots fun and exotic. The histories behind the clothes give them their own identity,” states Simon Staalnacke one of Moods founding fathers. 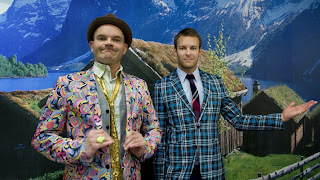 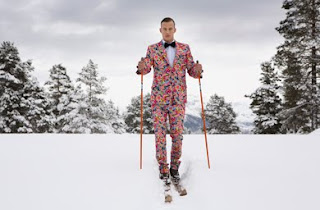 "234.243" is embroidered in every one of the men's suits,
referring to the number of tractors in Norway. 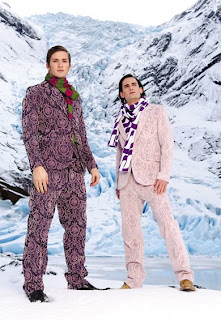 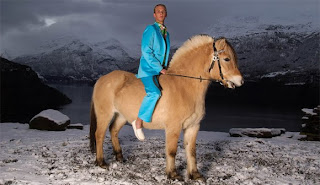 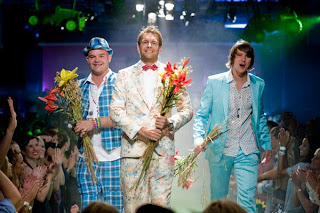 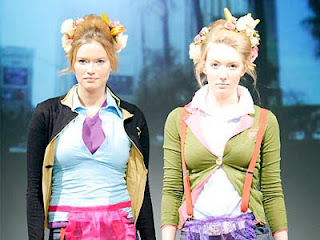 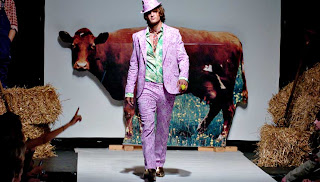 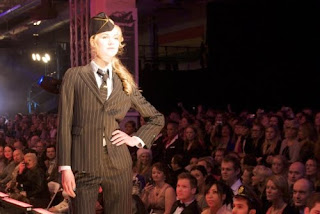 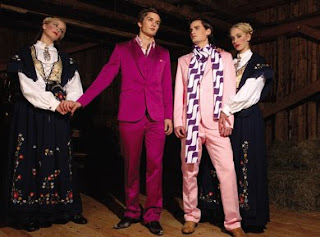 The largest Moods of Norway store opened April of 2010
in Stavanger, Norway 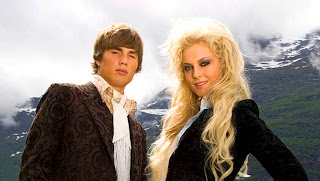 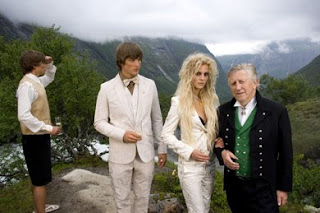 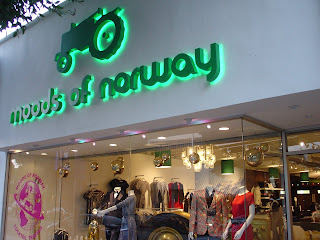 As of this golden minute, moods of Norway is represented in the most
polished boutiques and by the finest agents in Norway, Sweden,
Benelux, Switzerland, Spain, Japan and USA among others.

Stefan, Peder and Simen are still commandeering golden tractors around the world and are creating outrageous stories and super duper collections at an alarming rate. 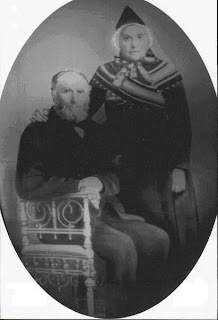 I wonder if my great-great grandparents, Ingebrod & Rognald would be
wearing that snappy plaid if they were here today?

{go forth & shop responsibly}
support the eccentric & have fun in life

What a wonderful brand! I absolutely love the advertising (especially that man holding the pink euphonium). Off to check out their clothes...

That is one place I would absolutely love to go! One of my favourite decorating projects was for a Norwegian couple. They were marvelous and taught me so much about the country. They traveled there frequently and brought me back the most beautiful jewelry!

Norway is, I think, pretty much the same latitude as Scotland, and you know how I feel about Scotland!! And I am not the least bit afraid of "preposterous clothing"!

This post totally surprised and entertained me. Fun to read and great to learn about a different side of Norway. Thanks.

I don't know where you heard of this fabulous trio, but they (and you!) are brilliant! I l-o-v-e fuschia pink, and the happiness that exudes from this line is mesmerizing (they probably need some pops of colour after their l-o-n-g winters, no?)
Okay we have everything and everyone here in Vegas, I want a Moods of Norway shop...they would fit in quite well here!
Happy Wednesday to you,
Nathalie

Wouldn't it be wonderful to see all our men dressed in those fabulous colours?!!! We watched a beautiful film the other night for the 300th time called the slipper and the rose...Cinderella in other words...and every time I see it I comment on the beautiful men's clothing, this appears to be the updated version!

I'm hooked...I'm such a sucker for great marketing! These pics are fabulous! Tracey xx

sold!! deb how do you nail a party in a post every damn time!?!? so fun. loved this.
my only problem is, now, i MUST have that bubble-gum pink tuba.
kisses!!
-katie

What fun, what color! You hit it on the head with the marketing-a-lifestyle comments. My boyfriend is Norwegian via Madison, and they are a mix of discipline and craziness!

They're my kind of people! And those are my kind of clothes! Once again, thank you for the introduction to a company I otherwise wouldn't have heard of!

my boyfriend is norweigen and he is a funky but classic dresser... i will pass this onto him...(no pink for him loads for me) great post as always...
have a happy 4th darling... xxxx pam

What fun clothes, but I dont want Mr P to wear this LOL :D I dont think he could pull it off!

Deb, you are so much fun! I love their fearless use of color and the liveliness infused into their design. Thanks for your very sweet comment on Lisa's blog. You're the best! xo

Such a fun, endearing post...I love anything excentric and daring....I was having a birthday dinner with my friend Michelle last night (old college roomates) and she is flying off to Norway to do a pilot for a new TV show with Genevieve (Dear GenevieveTv show)...just sent her your post for a wardrobe suggestion...
I think my husband would look fab in the little skiing number...

i think this is fabulous.
great threads no doubt.

i have often thought about the 60's colors and styles.....
life is america was facing the draft,
vietnam,
constant film clips of the bombings, the loss of lives,
and of course we had 'nixon'....
it is no wonder the happy colors of the sixties emerged.

i think that is why the mod colors etc have emerged again.
the state of the world today.

Norway knows where it's at baby. Thank you for introducing us to such a fabulous brand!

Hi Deb!
Been crazy busy here!!!! What a fun, Fun, FUN post. You never think of Norwegians like that....It's like they are the Ben and Jerry's of Norwegian fashion!!!!!Robes will love this as his son is Norwegian and lives in Oslo...So are you going to get some????? love the picture with the pitchfork..MA & Peter

I adore these guys! The world needs more of them, bring it on. The faceless grey men & women of the corporate world could do well to fill their wardrobes with these clothes. I'd change Accountant's in a flash if they subscribed to this dress code.
Millie ^_^

Soooo cool! You find the best stuff (love the number of tractors embroidered in the suits - fantastic)! You all have a fab 4th, we are going to be here, there and everywhere. Trying to stay cool! Thank you again for your lovely comments, I appreciate them so much!!! xoxo Jenny (Audrey says "NO!" - well, that's all she says now - LOL!)

I love when passion and detail all come together in one meaningful piece! In this case, an entire collection of items!! I also love the back story about instead of being happy because you're successful, it's great to learn of when success happens just because people were happy to begin with :)

What a fun post...and this cracked me up: Here's a story not about a lovely lady, but a three-some of lively Norwegians who were minus just enough sense.

How much fun is that?!!!
You discover the neatest things and (lucky us) you tell us all about it.
This line is new to me...can't wait to look into it. Their background is fascinating and their clothing reflects that. Kudos to them all!
Happy 4th, Deb!

How lovely - what a truly dull place the world would be without wonderfully eccentric people like these! And I can only imagine how fabulous Ingebrod and Rognald would have looked wearing these gorgeous clothes! Hope you have a lovely weekend. Leigh

Loving those bright colours! Have a gorgeous weekend xx

Not for the faint of fashion, huh? Love their bright pinks and their ads! It makes me not only want to dress in brighter clothes but visit Norway..sooo gorgeous!!!

Thanks~haven't heard this label before until now Deb!
The style reminds me of the charming Mr David Hockney~
ps: would love to have that pink boat floating in my swimming pool!

I love their ads. Everything about this company feels happy! Those Norwegians have got it going on; they are incredibly creative. At times I really wish I had been born Scandinavian.

What a neat pic of your great-great grandparents! Thank you for sharing it!

Bumpkin on a Swing said...

You must let me borrow this for Pink and Green Thursday giggles. I can't wait, and of course I will credit you with the find, with a little linky love!

The Norwegians in this country could learn a thing or two from Moods of Norway. We are much too boring!