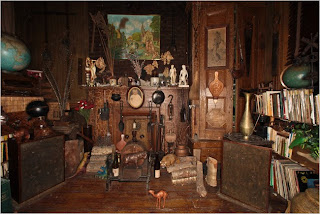 Where would you imagine this unique home to be located?
Bulls Gap Tennessee, Alligator Mississippi,
Bald Knob Arkansas, or how about
Grosse Tete, Louisiana?

Soak in each and every detail down to the stuffed cat,
ox-yoke chandelier, and razor strop.

Oh yes... believe what you are seeing. 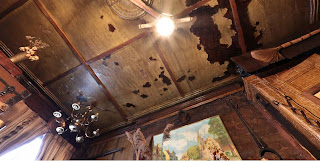 Amongst the authentic peeling ceilings, walls painted to look like planks,
stuffed animals and memorabilia, the necessities of our 21st century
are cleverly (I use that word loosely) masked.

Anything current and needed for daily use the owner has painstakingly
rusticated with mahogany or walnut stain. He has even created makeshift
clouds of wadded cotton in which to hang from the ceiling.
Must be a homage to living life under the big sky's of Texas? 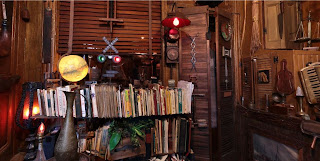 The 61 year old bachelor (go figure?) has carried his obsession for the
great frontier to new lengths recreating his vision over a 30 year period.
It all began with the desire to transform this apartments white walls.
"The color of death", he said. Not that the horse skull and stuffed raccoon
are anything like death? 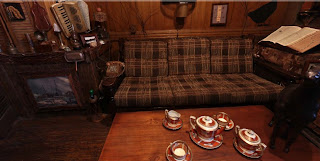 The process began slowly. The more changes he made, the more he
wanted to do to create a complete environment.” He etched woody
patterns into the door frames and moldings. He broke into the walls and
temporarily reopened two bricked-up fireplaces. He turned the bathroom
steam pipe into a tree, complete with curling serpent. 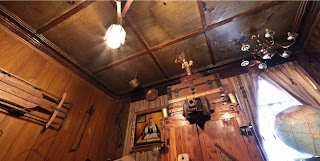 This apartment that Davey Crockett would of called home lies on
the 5th floor of a Manhattan, yes that's Manhattan, walk-up, 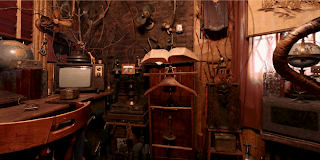 and between he and his Uncle, they have rented this apartment
since 1947.

After the Uncle went to a nursing home, and the nephew took
a brief job out of state, 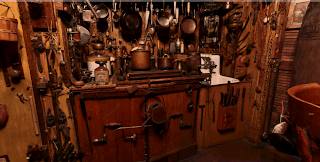 this time-warp of a gem was sub-leased to Actor Bill Pullman of such
movies as, "Sleepless in Seattle", "Ruthless People" and one of my
favorites, "Bottle Shock". Mr. Pullman remembered the place fondly.
“In the bathroom there was a painted knothole with an eye looking in",
he said. “It wasn’t like Martha Stewart's version of a faux-grainy cabin.”

After years of living life as a pseudo backwoodsman, and creating his own
wilderness in New York the renter is having to break camp and dismantle.

Due to financial hardships and the loss
of rent-control, he can no longer afford to live at 217 Ave. A. 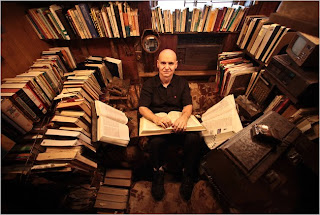 For this modern-day Daniel Boone, better known as Rob Schleifer,
it's on to a new frontier. Asked if he'll re-create the cabin in his next home?
“The work that I put into this place I can’t imagine ever doing it again,”
he said, before reconsidering. “Oh, I’ll do something.”
I can't wait how about you?

{go forth and live responsibly}
Be unique

wow! so much fun. thanks for that look!

He really is out on his own wild frontier!

...at least he has a vision, good follow-through, and obviously great execution. Good man!

Love it, thanks for showing us.

Oh my! Interesting peek, but please just give me white, order, clutter-free.

That is totally insane in a very interesting way.

Dear Deb,
I really love what he has done. I obviously wouldn't have it in my home but, it is a wonderful tribute.I look forward to his next project, Deb. XXXX

Okay. Am I nuts? I had to google to see if Bulls Gap Tennessee, Alligator Mississippi,
Bald Knob Arkansas & Grosse Tete Louisiana are real places. How is it you know about such obscure, interesting-named locales, Deb?

Rob's place is definitely different. I'm glad you shared it!!

I sure don't envy him having to pack up and store everything in this amazing apartment. Great find and another fabulous post - thank you. Leigh

Wow, what a trip!! Wherever did you find him?
You are so interesting Deb! I just love you!!

What dedication. I must say I am with him on the hiding technology bit. I know you can't really hide a computer screen but we have foldaway hidden doors for our TV and all kitchen appliances I can't stand looking at them. Besides which the EMF ray things will probably give us all cancer... ooopps I am sounding like a backwoodsperson from the deep south myself. !!! How sad that he has to leave it. xoxo

I am in true awe of such creative and such passionate people. Some may call them "crazy" but to others, like me, they are role models. Rob may no longer be able to afford this apartment but I am sure his passion will translate elsewhere, before we can ask again "what are you up to now, Rob?" - thanks for sharing this super story! ox

w-w-w-w-what? I don't know about this,and I"m a texas girl who grew up hunting! :) Actually, it looks just like one of our favourite steak houses here, Dunston's. verrrry intersting!!

For a minute there I thought you were taking photos in my grandfather's old hunting lodge. The resemblence is amazing. But this was the norm for Grandpa.
Do you mean to tell me someone did this deliberately?
Can't wait to see what he does next.
You are a hoot, Deborah. (Grandpa's favorite word.)

Wow! It just goes to show you how much a person can do with a bit of space. Its only limited by the imagination... and yes, okay, money LOL.
Fascinating.
*kisses* HH

I'm skeered! Oddly reminiscent of my father's house, where the theme is "I love hunting and Indian artifacts." The man actually covered his interior walls with logs, sleeps in a log bed, and hangs traps and dead animals on the walls. It's his Shangri-la; my nightmare!

how wonderfully whacky!! i, although, would gnaw both feet off and suck my thumb from anxiety stepping foot in that apartment. but from afar, i can appreciate it's fabulous whimsy.
kisses to you!

Now THATS a man cave !! Reminds me of Hollister Hovey ( or does Hollister Hovey have his look ?? ) Most likely the latter. Love these kind of renegades who know their style and run with it regardless of current trends. How apropos that he has to leave just when the pioneer look is 'in'.

It may not be everybody's idea of good interior design, but he created a home that reflects who he is and what he loves, and that's really what we should all do. Just maybe not with the serpent in the bathroom and the stuffed dead animals!!

That's the most bachelor of bachelor pads that I've ever seen! Seriously Deb, how do you come across these amazing features?!

Can you imagine?
Looking out the window must be such a strange experience.

Wow. Great post. You never disappoint. I hate that is having to be dismantled. The end of an era!

nothing would surprise me about the city.
and this is why i love it so.

I was overwhelmed at the whole thing..

Aloha,
WOW,so interesting!
hoping you are doing well and getting ready for a great weekend, loved my visit
sending you warm Hawaiian sunshine
Brandi
xxoo

I felt as if I stepped back in time in a fairyland space...This is a true labor of love, an antiquarian den....I wonder who does the dusting, as in new york dust is an unstoppable dust metter.
You were asking about the move...well this is the reason behind my lack of posting last week. i was just in North carolina following up production and our space is crazy...boxes, 15 years of collecting useless furniture, fabrics, you name it. i am actually borderline panic mode and just realized that our brand new showroom in on the same level (well hidden by beautiful steel fencing)as the vent system for a very fancy Indian restaurant!!!!! the smell on the terrace is atrocious and permeates inside the showroom....perhaps, i should call it quit and go retire somewhere quiet where I can garden and read all day...my kids will just have to figure out how to take care of their college...not a very practical idea though...

Absolutely inspiring! In a time when too many people jump on board too many trends; steam-punk and even frontier, it's so refreshing to see a rare example of someone who hasn't let trends direct his taste. Well done. Thank you for sharing this great story with us. It's a shame that he isn't able to keep his home, but I'm sure he'll make a great change to another one.

What a wonderful story! This house is full of treasures! What a fantastic read!Thank you for sharing it with me. :-)

First I have to laugh at Francine's moment of panic...she is amazing, and will endure!!

That space brings me back to my childhood, and my Aunt Fan's sunporch...when you are a child, it's a wonderland, where you are the princess and your little sister has to be the maid...lol.

There seems to be something interesting with a story around every corner....

Respect for what he did to the place! He definitely made it unique and his home, although I'm not quite sure I"d like to live there myself ;-) Bill Pullmann's bathroom story made me laugh (and creeped me out at the same time), but a home like this is way better than some of the sterile lofts out there!

What an incredible apartment...It's sad he has to move on and dismantle his history. Have a very happy weekend, xv.

What a unique place...and even though it is not exactly my style, I love seeing the pics. :) Hope you are doing well.

That apt. looks like my husbands farm house and garage, he collected every thing loved auctions, It took a month to get rid of all his stuff before we could move,into, the new house.

Hi Deb
Well imagine putting all that work and resources into a rental place... and then losing it.. poor guy... I'm renting at the moment and find it frustrating not to be able to even put a nail in the wall.... I hope whatever he does next is just as enjoyable.. Have a great week.. sorry I'm so late to your post.. not sure how I missed it...xx Julie

Thank you for the trip, both witty and touching to the last. Does this mean the famous rent control in NY is now over? sad.

I hope he enjoys his next place and maybe even tries a white wall, not half as morose as a taxidermy ;)

Wow, that is just amazing! Definitely unique. Hope you are having a great week!

Stopped to wish you beautiful week ahead!:-)))

Wow! I read this post a while back and I just am amazed, totally not my taste, but I just have to admire how much work and time went into this. Sad he has to leave, very sad.

This is amazing. I would love to be so dedicated to one theme/sensibility! And I would hate to have to move all of that stuff.

Wow, this place is unreal! It's so sad to hear he's losing the apartment - the work of art - that he has spent 47 years creating.

And those wood flooring are so western. The location must be a tropical state as in Tampa, Florida. Thanks for sharing this unique house!