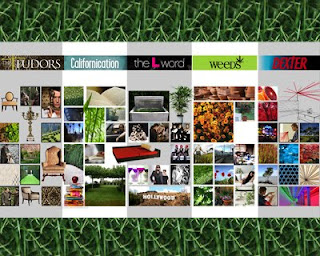 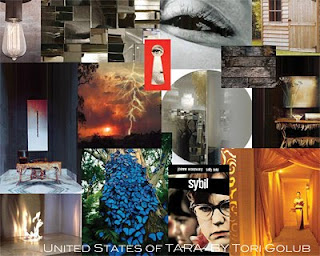 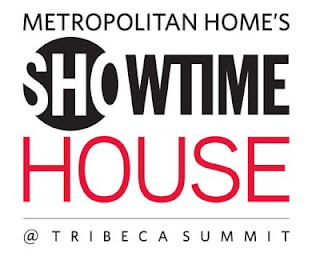 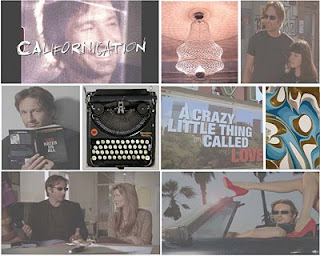 Showtime House, at 415 Washington Street between Hubert and Laight Streets, is open on weekends for public tours Sept. 12 - Oct. 18, and tickets will sell for $20 each, with all proceeds from the ticket sales benefiting the non-profit organization Housing Works.

Pair modern design’s top talents and television’s most provocative shows and you get none other than Metropolitan Home’s Showtime House. Set in two $25.5 million penthouses atop Manhattan’s Tribeca Summit, this 14,000-square-foot dream space has become the creative playground for 14 of the world’s leading architects and designers. Their diverse skills and backgrounds bring dynamic layers to the house, while the off-beat characters and plotlines from six of the hottest original series give their work must-see style.

Each space runs parallel with each hit show resulting in entertainment equal to that of each fabulous episode. 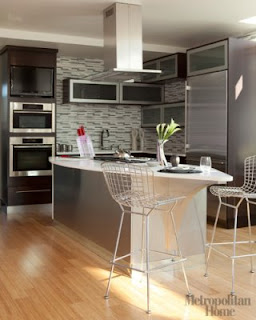 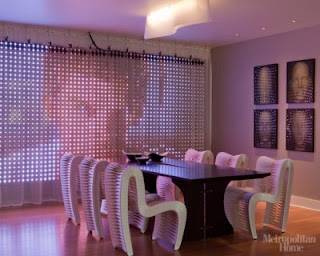 Dexter - Dining Room - Marie Aiello designer
The table’s flat surface is intentionally marred by a gash that
mimics the cut across his victims’ faces. Chairs bear a
somewhat creepy resemblance to a human skeleton. 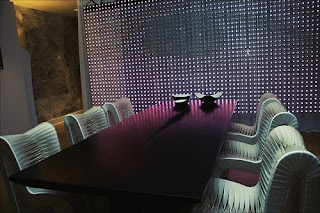 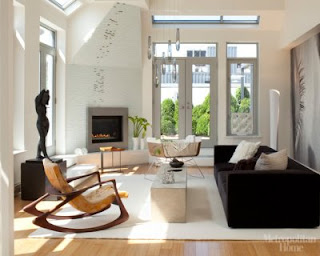 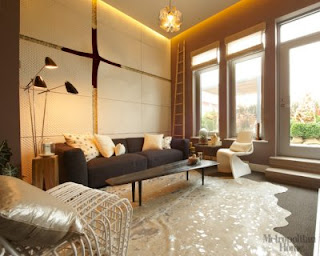 Nurse Jackie - Waiting Room Lounge - designed by Workshop/adp
All the unique shapes in Jackie’s lounge make waiting for the
doctor time artfully spent. Pendant lights are suspended from a
ceiling alcove that is shaped like a pill-bottle lid. 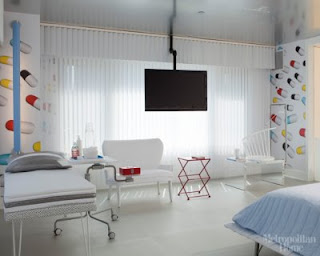 Nurse Jackie - Master Bedroom
Christopher Coleman and Angel Sanchez. designers
Clues to Jackie's line of work range from the colorful pill
wallpaper to X-ray vanity to the hospital booties that double as slippers. 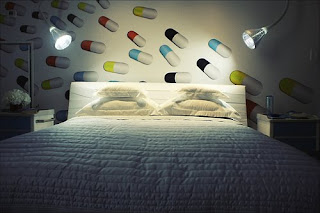 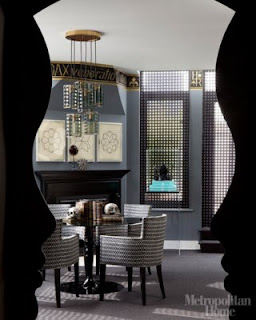 Tudors - Study/Sitting Room - Richard Mishaan designer
Above the fireplace is a gold-gilt wall border freehandedly scripted
with one of Henry’s memorable quotes. The border grounds the room,
and establishing the identity of its inhabitant as someone cultured,
well educated and a tad showy. 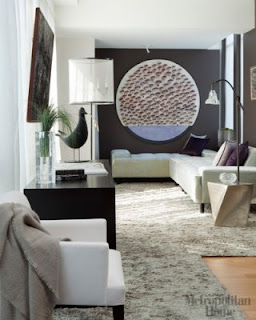 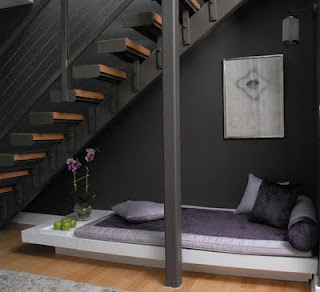 United States of Tara - Resting Place for alter personality "Alice"
designed by Francine Gardner
Francine is one of my favorite bloggers. Amazingly friendly and
supportive to fellow bloggers. This talented woman knows how to live & savor life. 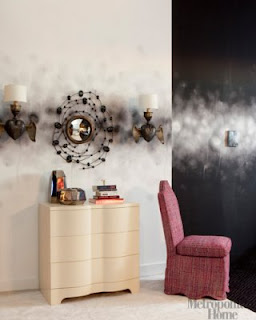 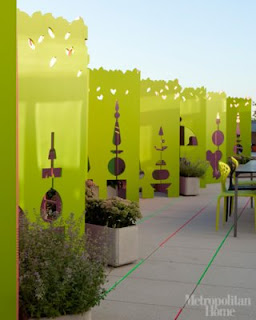 United States of Tara - Terrace - designed by Surfacedesign.
Each has its own wing distinguished by privacy screens decked
out with show-specific imagery. Tara’s wing captures the fractured
nature of her life. 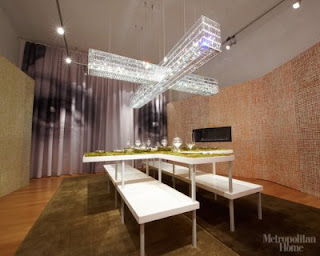 Weeds - Dining Room
Designer James Biber's inspiration for this space was taken
from an episode in which Nancy’s partners-in-crime swipe a
church cross and repurpose it as a grow-house light. 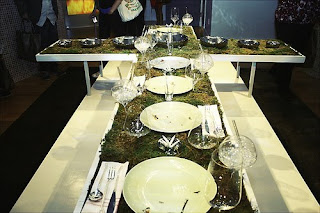 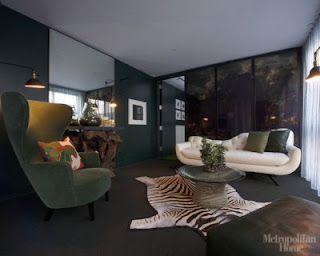 Weeds - Lounge - Paul Latham designer
The combination of different greens, a living terrarium and
a glazed ceramic plant nods to Weeds in a more literal way. 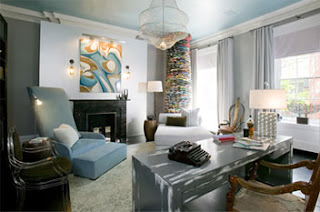 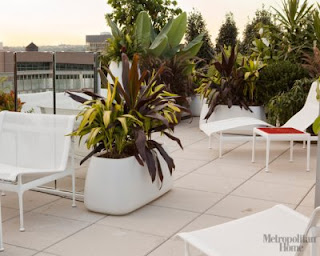 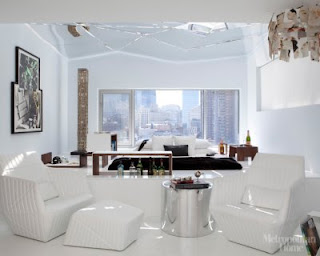 Californication - Living Room - Markus Dochantschi designer
According to Dochantschi, the mirrored ceiling derives its shape from a
complex computer model constructed to reflect various sexual positions.
To keep all of Hank’s necessities within arm’s reach, the platform hosts a
variety of movable furnishings as well as fixed
staples like a bar and bookshelves. 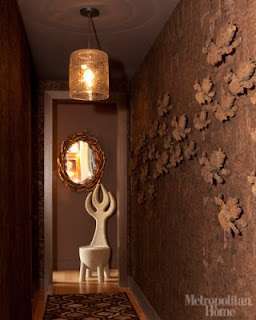 Oh my, what is wrong with me. I love the Dexter house. The Nurse Jackie bedroom is great as well. ;)

In love with the Dexter dining room and that Californication living room.

Fantastic Fun post Deb!! I'm loving the United States of Tara, that is one of the very few shows I watch, that room is my style, I call myself the schizophrantic decorator because my style is all over the place...kinda of like me :)
Have a fun day filled with creative beautiful thoughts
Bunny

I toured the house last week and must say it is really fabulous. i must point out however that Amy Lau's room, as well as Laura Kirar's are actually from last years showhouse, which was equally as great. This year its a pair of penthouses, so each show got double exposure, (plus a few terraces thrown in for good measure.) It was interesting to see each designers take on the same subject

Thank you Haute Decor for pointing out last years rooms. I hate making mistakes & I appreciate you being honest. I owe you.. Happy to hear from someone that had the opportunity to view it & thought it was fabulous. Wish I were in NY!

the Tara terrace with the cut-out topiaries is amazing. i firmly believe manhattan is the epicenter of the universe!

Thank you , Thank you for your great comment on my Tara's duplex. I have become very fond of the character. I so wish that you were in New York and i could walk you through the penthouses.....we could have a great time commenting and chatting.... Francine

So so interesting, what talent. Cannot imagine the work that went into them.
xoxo

Cheers to such great talent & creativity!
Such wonderful inspirations!!
xo*

Very interesting,Deb! Thanks for entering my give-away - hope you win!

I'm afraid Deb that, being in the U.K. I'm not familiar with these designers but love some and find some a little off the wall !!!! Very interesting rooms which give us all something to think about and maybe use parts in our own homes. XXXX

Deb-I love the Dexter rooms, but they are all wonderful. I need to zoom up to NYC before this ends.

The Nurse Jackie Bedroom is Fab! Love that show!
-M