Confessions of a Window-Dresser Wannabe 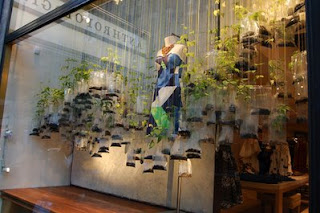 Show Spelled Pronunciati[an-thruh-pol-uh-jee];
an oasis of off-hand sophistication where you can shop without
feeling like some SUV-driving, gold-card-wielding,will-my-kids-get-
into-the-right-school suburbanite; where you can buy into the
season's runway-sanctioned trend without feeling
like a fashion victim. 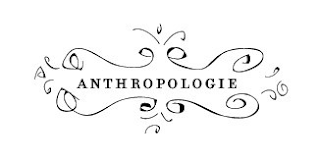 When I grow-up(never you mind that I'm in my 50's),
I desire to be a window-dresser for the
bourgeois - bohemian - bazaar called
'Anthropologie'.
My bevy of mentors would comprise of the following talents; past, present and fictional: 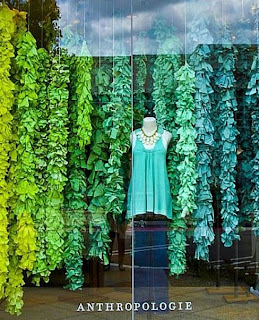 Anthropologie evolved from the youthful and urban-hip shoppers destination, Urban Outfitters; which evolved from the bohemian, emporium, 'Free People' in Philly. Free people began in 1970 as the husband & wife collaboration of then hippies, Richard & Judy Hayne. Appealing to local college kid's, this general store duo scavaged China town, dyed their own t's, & bought clothing by the pound from a local ragman. After the first year the business made the cut, but not the marriage. Judy went on to create the successful 'White Dog Cafe', & stayed true to her liberal idealism while Richard switched gears to become the conservative capitalist entrepreneur.

"The irony of Richard Hayne", as described by Philadelphia Weekly's Jonathan Valanina,"the undisputed king of under-30 retail cool, is that there's nothing remotely hip about him. Nothing at all. With his loosely knotted yellow silk power tie and boardroom-blue dress shirt, he looks like a typical $1,000-a-plate Republican fundraiser attendee. An eyeglass case bulges nerdily in his breast pocket, his teeth are slightly crooked and a few thin strands of hair arc over a small constellation of moles mapping the northward advance of his forehead".

"We have two rules" states Haynes,"It's okay to fail and never look in the rear view mirror." 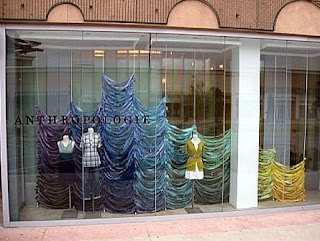 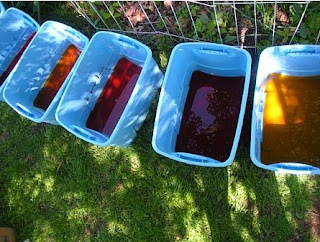 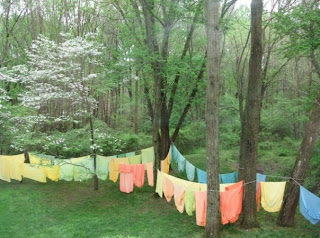 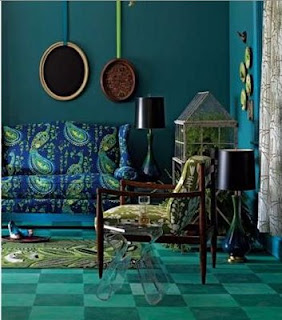 Vignettes in-store are as amazing as their windows 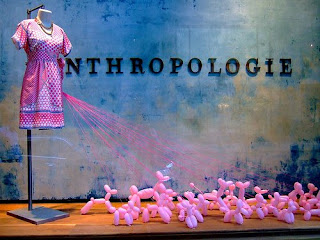 "One of our core philosophies," explains Anthropologie
President Glen Senk, "is that we spend the money that other
companies spend on marketing to create a store experience
that exceeds people's expectations.
"We don't spend money on messages -- we invest in execution."

Anthropologie - you had me @ hello 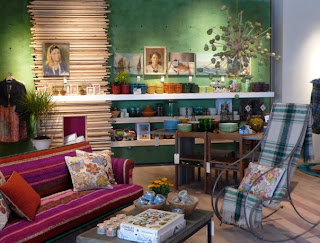 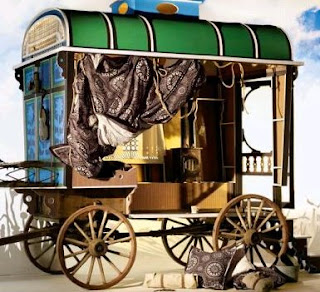 each catalog page, vignette or window has a story to tell 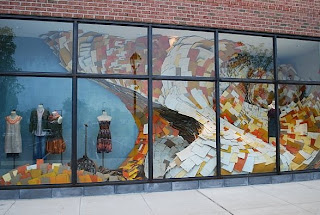 Facts: Demographic's a'la Anthropologie - per President Glen Senk.
How do you measure-up & would you agree? From the get-go I failed....
Oh Anthropologie-if I continue to be that faithful consumer or better yet, your window-dresser, will I be forever branded as that sophisticated, confident, individualistic, urban-urged/suburbanite gal-pal on the hunt for originality and adventure? 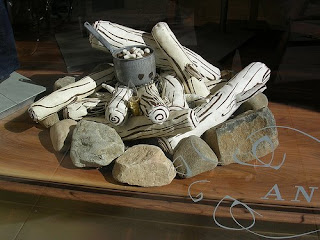 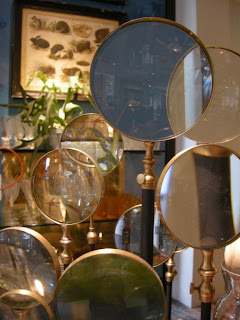 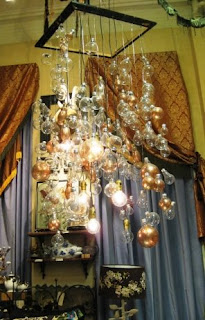 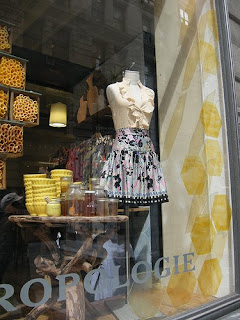 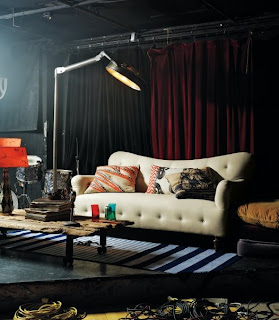 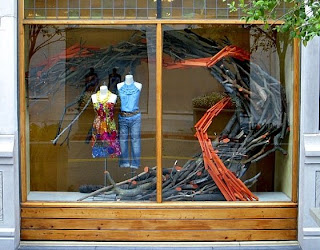 A's window-dressers continue to knock me to my knees with their
use of
materials, and incredible artistic abilities 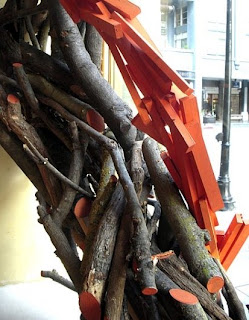 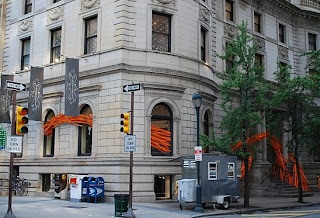 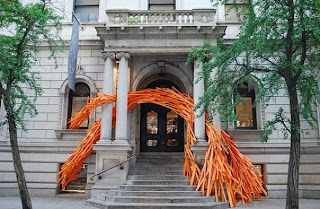 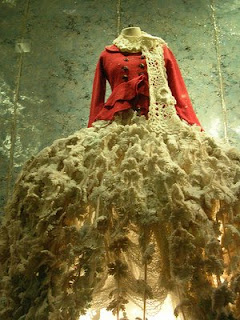 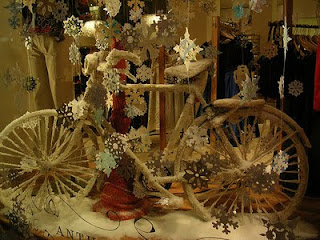 You would find me the first week of December of each year, starring into the windows of my neighborhood Anthropologie store, mouth wide-open and in pure reverence of craftsmanship and shear force of shrewdness of those Anthropologie window-dressers. I would then tottle off home with those images mentally tucked away; hopefully to apply an idea to my yearly residential Christmas decorating endeavor.

Ding Dong! that is the sound of you ringing my bell!! I often go into Anthropologie just for the inspiration. So many unique things there! I do admit to spening more time in their home section rather than their clothing section, although I do love their shoes! And, like you, the occupation of window dresser seems perfectly wonderful to me. Of course, when I was a little girl, I wanted to be a gift wrapper!

Those demos are hilarious. My friends and I were into Anthro well before our thirties and well before that kind of salary range! Great post! I've dreamed of being a window dress since Mannequin. : )

Excellent post! Love it ... now tell me where I can find and date someone in that Anthro demographic. Wow, that's quite the woman, but daddy like. I don't shop there, but have routinely stared into the store over at Farmer's Market/The Grove here in L.A. Thanks!!

I can only comment on the photographs and text as, coming from the U.K, I've never been,although, I think they may be opening a store in either Regent Street or Bond Street around September.Can't wait..it looks amazing.
I love the 'window dressing' on the outside of the shop.Really interesting post Deb and such beautiful and artistic window dressing. It was already an art form but I think more so nowadays.
I love going to see the windows at Christmas, Harrods, Harvey Nichols, Liberty and many, many more are absolutely out of this world as I'm sure Anthropologie is.

Oh I just LOVE your posts ! I used to be a visual merchandiser for Macy's SF and idolized those who had made it up to window dresser ... that was my dream ! Anthropology has done such an amazing job of bringing back artful and resourceful merchandising which has been absent for so long with big retailers. Love the Simon Doonan quote ... he says so well what so many of us think. You are the best ! XOL

What gorgeous windows! Love the info. about the Anthropologie demographic ~ really interesting!

Totally loved this post, Deb! I am a big fan on Anthro and loved the background you provided, which I was completely unaware of. That is so cool that you love Ned Devine, too! I knew we were kindred spirits! Have a great weekend! XO

OH DEB... What a post. There is no 'Anthropologie' downunder so I can only dream and wander through the 'online' corridors to get my fix. I was just telling someone this week that my childhood 'dream career' was to be a window dresser. Way back then it was considered a dead-end 'no-eductation' job and little call for these skills in Sydney. The irony is, we become successful at something else that pays well, then spent the rest of our lives 'trying to get back to our dreams'. Well your post has certainly allowed me to dream. I love Richard Hayne's quote 'We have two rules - It's okay to fail and never look in the rear view mirror' So far I have the 'fail' part down pat [not so much the OK]. Fabulous inspiration DEB.. thank you thank you. xx Julie

I have yet to see an actual Anthro window in person, though I love the products and the brilliant merchandising. This post was so much fun! I always wanted to go into visual merchandising, but my life ended up taking a different path (home renovation & design). Simon Doonan is hilarious. Love that he speaks his mind!

I heart that store

They have FAB windoe displays!

A buddy of mine had that job for years...they spend overnight doing those huge art pieces.
I wonder why they think only married & committed are their major demographic... single I have more to spend on me :). I also must state roughing through Europe always includes Eurorail & never a masseuse.
I love al lot of their product but so much is too steep in price, especially after years of seeing wholesale costs of a lot of their lines.
But...
it is always a treat to go in. On summer Saturdays when her mom would drop my beloved Godgal Hailey off at the boutique at closing we stroll through the streets of Birmingham (MI) down to Haileys Anthropologie store to smell candles & select a treat. The only little girl with Nigella measuring cups for play, headbands & her beloved stuffed Airedale...Chevy. I am always a sucker for that face.
Simon's comment was spot on. I adore him so & if you haven't you need to read his book...its hilarious!!!
Stay cool in the sweltering Texas heat.

I SO want a Anthro store here, but just on the net for the moment.

such visual delightsss...
I used to be a visual merchandiser for a short period...Very inspiring & love those large magnifying glasses! ~Lovely weekend dear*

Gorgeous displays. Beautiful stuff, I have got to look for this place next time i am in america. Hope you are having a fab weekend!

Oh i love anthropologie! I have the teacup lamp that i just adore! x

This is an incredible post!! I adore Anthropology and have a rather long wish list of items I am hoping to get for my new craft room I am working on. Just waiting for the sales!!! I have been a fan for a long time and your post gave me so much more insight and info on this wonderful company. I also adore Simon Doonhan and Jonathan Adler, oh and Nigella is my favorite!!!! I can't get enough of her..okay can you tell how excited I am!
Thanks for the great post
xoxo
Bunny,

I adore Anthropologie's store displays and I LOVE the reference to Simon Doonan's book (he's a personal favorite of mine -- his regular musings on NY Observer are in my favorites and Eccentric Glamour is a "must read").

Anthropologie's displays are amazing. My Twitter followers will accuse me of being paid by Anthropologie. I can't remember how many times I already mentioned their window displays :)
For the record, no, I'm not being paid. They're just that good!

im from the uk and i never thought of being a visual merchandiser or window dresser/display artist im even thinking of changing my studydy course after i complete this one coz im doing a dissertation on visual merchandising at the mo and i was thinking of getting some kind of apprentence or doing a course so i can get a job in this area but i researched about it there is no specific qualification !? also i think the most simple yet not cost affective ways for a window display is more effective like the window with the orange blocks and tree stump.x

[i][b][url=http://0503500010.com]Escort Agency in Israel[/url][/b][/i]
Barby-Girls is an Escort Agency providing female escorts services.
We have a full portfolio of the most elegant and stunning girls that you ever likely to meet in Israel.