Wall murals? The mere thought evokes ghastly mental images of decorating gone terribly wrong. Or, do you think 70's time capsule? It was not until I saw a photo of a room in the UK edition of Elle Decoration magazine, that changed the way I envisioned their use. It was funky, fun and in this case, retro (like me!).
I immediately set out to paste into action, a forest scene for one of our guest bedrooms. It was a way for me to bring a bit of the Pacific Northwest with me to Texas. I really dislike 'theme' rooms, so the plan was to mix it up. I found a 60's chrome & patent leather chair, a teak danish modern credenza, & leaned far away from the 'themed room' philosophy. I did my internet research long & hard before finally deciding upon that 'just right' wall mural. Prices vary & it turned out that ebay was not the cheapest route for me. I opted for Creative Wallcovering.com.

Artistic homeowner.com has a mass selection of images from all over the world. My pick, Edinburgh castle. I would be tempted to theme it up a wee bit with some anglo saxon/gaelic detail!. Pottery Barn Teen has a good selection of murals appropriate for your teen, but often some appropriate for adult spaces. My daughter Emily opted for her own artistic rendition of a wall mural utilizing magazine ads from all her favorite labels & designers. Odd enough, my mother said she did that very thing to her bedroom walls as a teen, 60 years ago.
My favorite image is that of the photo below with the bright yellow sofa. Taking a mural & framing it in several same sized frames is glorious against that wall. How about an office space, or child's room with a world map?
Imagination is what it's all about. I took a step backwards to make sure that imagination of mine didn't get the best of me. Do you like murals?
Be sure to check out Julia @ Hooked on Houses - "Hooked on Friday's" blog party- to see what everyone else is hooked on today. Follow Julia on facebook & twitter.
Have a 'frugalistic' but fabulous Friday. 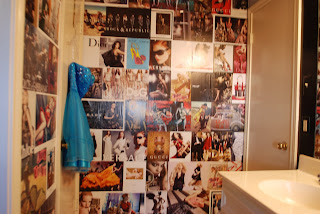 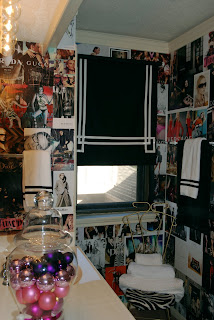 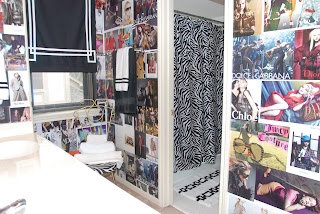 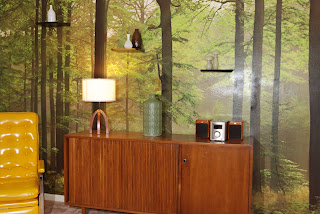 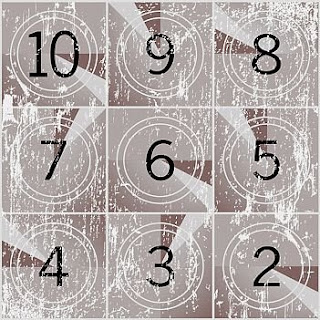 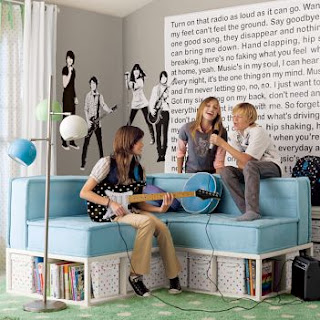 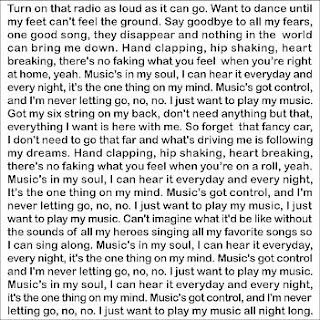 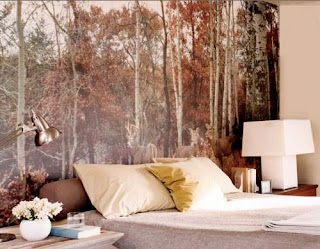 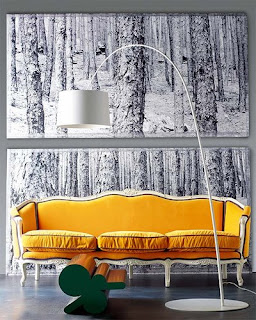 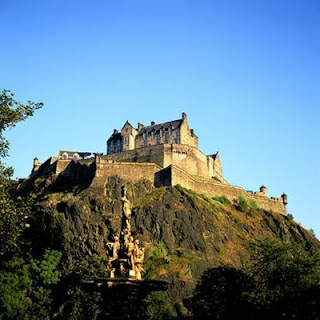 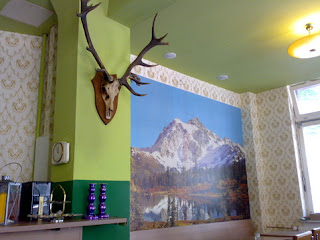 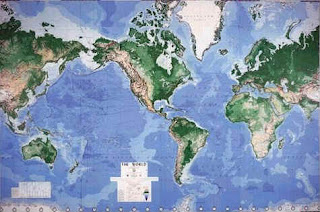 Wow mom! I think this is one of your best articles yet! I love the pics of Em's bathroom. It looks like it turned out great and the rest of the murals are really neat looking. I have to say, the NW one is my favorite!!

I think murals can look really nice if they're done well and aren't too "themey". To me, the mural should be the backdrop for the design, not the whole design.

I really like how you used the tree mural in your guest bedroom. The little shelves with the vases add a cool dimension. And the teak credenza looks great against the trees :-)

Thanks for participating in our first Rewind Wednesday :-)

I remember most of these murals from your original post, but not all of them -- love the "Play The Music" mural. Being a writer, I have this odd attraction to letters and words!! And the two-piece tree mural behind the yellow sofa is cool :-)

Fantastic stuff - if you are ever in the S. Cali area - let me know! www.MuralsByMere.com