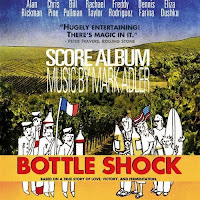 I am bye far not a wine snob, nor do I pretend to be well educated when it comes to the fine art of wine making. I am a girl who won a beer tasting event at the 'Rock Bottom' in Seattle. Although exciting, it does not sound as eloquent does it?! But, none the less, my love of beer did not prevent me for truly appreciating the movie "Sideways ". Released in 2004 and starred Thomas Hayden Church, Paul Giamatti, Virginia Madsen, & Sandra Oh.

I was equally thrilled to take in the newly released (to dvd) movie, Bottle Shock starring Alan Rickman, Bill Pullman, Rachael Taylor, and Chris Pine.
The movie is based on the book "Judgment of Paris" by George Tabor. George was the only reporter present at the 76' Paris Wine Tasting . He writes about the seminal contest and its far reaching effects.
The Paris Tasting of 1976 will forever be remembered as the landmark event that transformed the wine industry. At this legendary contest -- a blind tasting -- a panel of top French wine experts shocked the industry by choosing unknown California wines over France's best.

The movie with it's fabulous 70's soundtrack (Foghat, Doobie Bros.), and beautiful scenery, reminded me what is so romantic and exciting about the making of wine and the gorgeous California wine country.

Whether you are looking for a fun escape for a few hours for yourself, or you have someone in your life that appreciates wine, what a great gift. If you include one or both movies, a bottle of wine. To go all out, how special would it be to include a bottle of wine from Chateau Montelena Winery? The winery that won the 1976 Paris Tasting. For example - a bottle of Montelena Estate Zinfandel is $30.+ shipping, online. If you want to give the gift to someone who loves to read, opt for giving George Tabors book, along with a bottle or two of wine. You could wrap up both a French wine and a California wine. How about including the Sideways or Bottle Shock soundtracks? The Bottle Shock score is available through Amazon and you are purchasing only the mp3. You will have to burn the cd yourself. The score is void of all the terrific 70's rock, but the music by Mark Adler is beautifully relaxing. Whatever your budget, or the idea, I am sure the receiver will be swept off to California for a few hours out of their day. Makes me long for California, a porch with a rocking chair, and a good red.